Ates Diouf – From Senegal to SIMA and OCB

Diouf is more than a skilled and hardworking academic, he is also a gifted footballer. Before his acceptance into Montverde Academy, Soccer Institute at Montverde Academy (SIMA) Head Coach Mike Potempa, was in Senegal and spotted this future Eagle.

“My life in Senegal was not easy,” said Diouf. “I grew up playing in the sand and dirt, playing without cleats in the street, and walking to practice. I sacrificed everything and worked hard every day. Sometimes I would play without eating. At the end of the day, it paid off.”

These sacrifices partnered with supportive coaches, were able to provide Diouf with the opportunity to impress Coach Potempa and prove that he was dedicated to improving his game.

“Coach Potempa came to watch us play in Senegal, that day I played really well and then he chose me to come to the USA. My family and I were really happy and proud because I worked really hard to achieve that opportunity,” said Diouf.

"I can remember the very first time I saw Ates play in Dakar in 2015,” said Coach Potempa. “He stood out right away with his technical skills and his understanding of the game on a surface and in a match that was physically quite difficult for him to play as he was much younger than the others. Within five minutes I knew he was a superb talent and one who would do great things in the appropriate environment.”

Diouf is a perfect example of how hard work and dedication can make for some of the biggest rewards. His journey to reach Montverde Academy was not easy and his struggles did not stop when he reached campus. Upon his enrollment in the Academy, he struggled to learn English through the English and a Second Language (ESL) course but due to his dedication to continue improving, he is now bilingual in his native French and improving English.

“Now, here we are in 2019 and Ates continues to progress, is fluent in English, a model student who will graduate from Montverde Academy in June and will now start his professional career on Saturday night. It's a great story and I'm very proud of Ates for his work - he is the epitome of what we believe in here, using education and sport to change lives," said Coach Potempa.

That mentality provided additional opportunities throughout his time on campus including some of his fondest memories which include beating AS Roma 2-1 with SIMA Gold in the Disney Tournament.

“It was a really special game to me because it was my first big game with SIMA Gold. I was the youngest in our starting 11. When I saw the line-up, I was nervous because I thought that I was not going to start that game. The coach trusted me, and I had to give him my trust in return,” said Diouf.

Due to Diouf’s work ethic and determination, he was provided an opportunity to join the Orlando City B roster in League One for their inaugural season. He sees this opportunity as a challenge but is grateful for what prepared him for this next step.

“SIMA and Montverde Academy means everything to me because they made me a better person and a better player. Wearing a SIMA jersey means a lot to me and makes me want to win. I always give 100 percent or more to show how much SIMA and MVA has made a positive impact on my life.”

His passion for the game has crafted a dream to play for the biggest club in the world. This dream is rooted in a much deeper understanding of the opportunities the sport can provide and learning to love something that can take you so far in life.

“Soccer makes me happier every day, I love to play soccer. I can’t spend one day without playing or watching soccer. I also love how the art and passion of the game unites people, nations and races. For me, soccer is the best sport in the world. I forget all my problems when I step on the field.”

From Salif Diao's Sport4Charity in Dakar, Senegal, Diouf found his place and Montverde Academy and the SIMA program and was able to secure a position on the OCB roster for its inaugural League One season.

“SIMA and MVA are the best place to develop as a person and a player. SIMA has very good coaches like Coach Potempa, Coach Toni and Coach Silva. They are the kind of coaches that will tell you directly if you are not in the right position and that will support you in good and bad moments in your life. I am blessed to be where I am today, SIMA forever.” 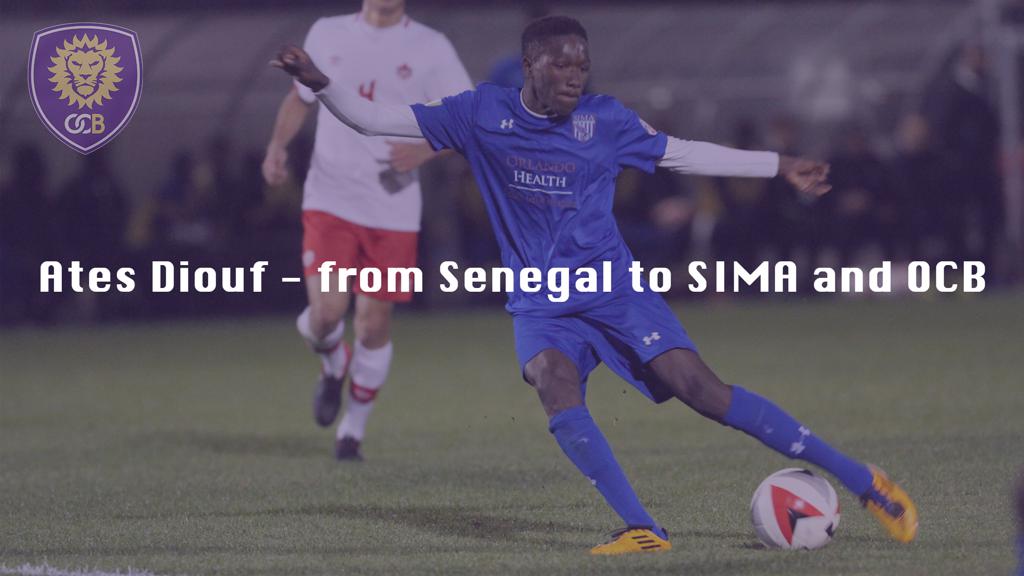