Shelove Achelus ’17 marks the third in a string of SIMA alumni to sign professional contracts in Europe during the month of August as they have joined the Danish First Division. Achelus, originally from Haiti, will join Viborg FF, while Monday Bassey Etim ’17, and Jules Gildas Youmeni ’17 have signed for FC Roskilde.

All three look to join their respective Danish clubs with a similar culture to that of their old stomping grounds. FC Roskilde, like Montverde Academy and the SIMA program, focuses on the integration of sport and education and looks to make the most of their athletes by developing the mind within the sport of soccer in conjunction with their tremendous physical attributes. Viborg FF holds many of the same values as their league opponent and Montverde Academy. They believe in youth development and community outreach. Both clubs have created optimal environments for well-rounded professional athletes.

“I am extremely pleased for our SIMA alumni as they continue their career paths at the professional level,” said SIMA Director Mike Potempa. “I am confident that the values and training they received here at Montverde Academy within the SIMA Program will allow them to succeed in Europe and continue into the next phase of their personal and professional development. We are very proud of them.”

Monday Bassey Etim, a native of Calabar, Nigeria, came to Montverde Academy in 2015. In 2017, Etim signed a professional contract with Orange County SC in the USL Championship. In 2018, he signed with Rio Grande Valley FC in the USL Championship, and now looks to be a strong attacking force as a striker for FC Roskilde already scoring 3 goals in 5 matches.

Jules Gildas Youmeni, a native of Bafoussam, Cameroon, also came to Montverde Academy in 2015. In 2017, Youmeni signed a professional contract with Orlando City B, who at the time, was in the USL Championship. Later, Youmeni signed a professional contract with CD Sarinena, a Spanish team in Segunda Division B prior to signing in Denmark.  On the opposite side of the pitch from Bassey Etim, Youmeni looks to hold FC Roskilde to a tough defensive season.

Shelove Achelus, a native of Port-Au-Prince, Haiti, came to Montverde Academy in 2015. In 2017, he signed a professional contract with AC Ajaccio in the League 2 of France. Achelus, the youngest of the three, looks to find his stride in the middle of the pitch as an attacking midfield player for Viborg FF.

With three of our 2017 SIMA alumni now playing professionally in the Danish First Division, the formula of combining education and sport to provide opportunity can be witnessed week in and week out in European football.

“Professional football is the dream that every young man has here in our soccer institute,” said Potempa. “The fact that we can now watch three boys who started right here at Montverde Academy in 2015 play in Europe is a dream come true for the entire SIMA family.” 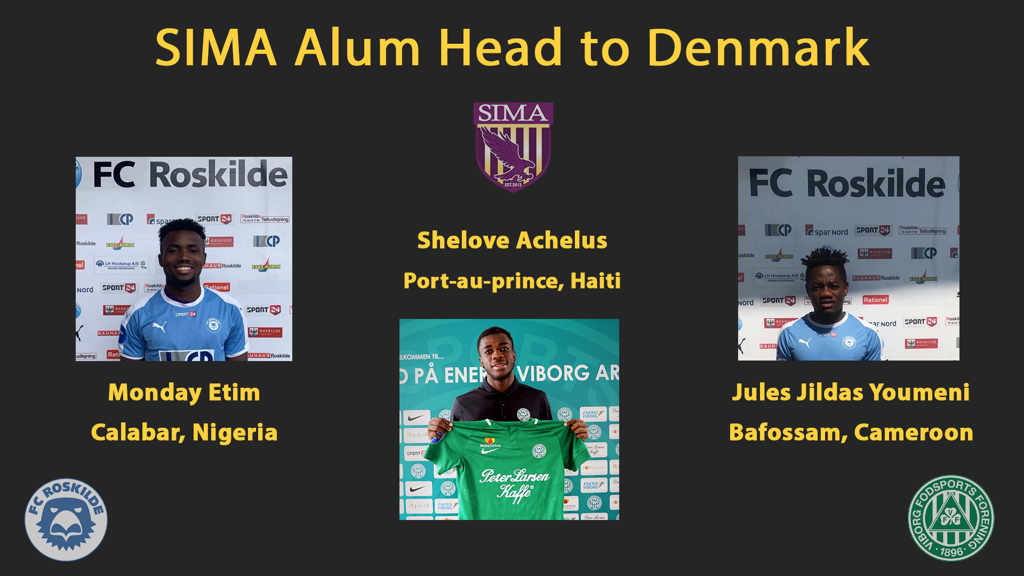