Competitive. Passion. Winner.  These are three words I would use to describe Montverde Academy alumnus and now 2019 MLS Rookie of the Year – Andre Shinyashiki.

I can remember the day Andre first arrived on campus like it was yesterday.  He introduced himself to me at the first training session and what I saw at that time was a young man who was talented, small in stature, but above all possessed an extremely unique quality that I have not seen in too many student-athletes who have joined the SIMA Program over the years – Andre wanted to win.

Now when I say that he wanted to win, he wanted to win every exercise, competition, match, scrimmage, footrace, and small sided game.  It did not matter what it was, Andre wanted to be the best and he was never afraid to outwork the others to get there.  People often assume that he arrived as an incredible talent from Brazil and just made it to the top due to what was already in place.  I can assure you that this was never the case.

Andre arrived undersized and quiet off the field.  He was never the biggest or fastest student athlete we had in the program.  However, what he did have was a drive to compete every day, a motivation to learn, and was hungry for success.  In my opinion, these are the most important qualities to being able to have a career in any field, especially the sporting arena.  Andre loved to score goals and he was one of these talents that comes across every once in a while who is always in the right place at the right time.  He was made of goals and he had the competitive spirit to bring others along with him for the ride.

As a student, Andre was extremely intelligent and was never an issue off the field.  In fact, the only trouble he ever got into off the field was being caught on the training ground by a staff coach doing extra work on his own when it was not permitted at the time.  Always smiling and wanting to work hard, I can say that he truly made the most of every moment he spent here at Montverde Academy.

I can remember the college recruiting process during his senior year.  We had a lot of college coaches come to campus in search of a true no.9 goal scorer and when I suggested Andre after a training session or a match, there were many who doubted his physical presence, athleticism, and overall speed.  The concern was always, “How will this translate to the college game?”  Even after our college showcase in December, there were only a handful of schools really interested in Andre to the point where he was offered scholarship dollars and an official visit to campus.

Sure enough, Andre had a solid freshman year scoring goals and helping to provide a solid foundation for the future as the University of Denver would then make it all the way to the Final Four in his sophomore year competing among the nation’s best for a National Championship. In 2018, Andre was the leading goal scorer in all of NCAA Division I Men’s Soccer scoring 28 goals and catching the attention of MLS teams, agents, and scouts who were appreciating his natural ability to do what every team needs and what he demonstrated every day here at the SIMA.  Andre could score goals and was a winner.

In January of 2019, Andre was selected to the 2019 MLS Combine in Orlando where the very best talents from college soccer would compete in front of every MLS franchise in preparation for the MLS SuperDraft that would take place immediately after the event.  During these two weeks, I fielded several phone calls from MLS general managers and coaches asking me what I thought about Andre and did I think he had what it took to be an effective striker in MLS right away.  I always replied with the same answer. “If you want a competitor who loves the game, has a professional mindset, and you need goals, he’s the one.” Of course, he did not disappoint as Andre wound up scoring two important goals at the combine and his stock rose straight away. However, he was an international player which makes things quite difficult when it comes to a professional soccer contract offer from Major League Soccer.  Would he get drafted?  Did he do enough at the MLS Combine despite being a day late to be present at the Hermann Trophy Award Presentation?  I thought so, but of course no one could be sure.

As the 2019 MLS SuperDraft unfolded, news hit early on that the Colorado Rapids had made a trade with the Chicago Fire to acquire the fifth pick of the first round.  Of course all of us in the SIMA offices were hopeful that it was to take Andre, but one never knows in these circumstances.  Sure enough, when the fifth pick overall came to announcement, the Colorado Rapids selected Andre Shinyashiki.

For the first time in school history, Montverde Academy had a MLS First Round Draft Pick in the sport of soccer.  Andre had made his way to the professional game through sacrifice, patience, hard work, and dedication.  Of course all of these qualities are necessary for anyone to be successful, but what I was most proud of was that Andre had made it to the professional game through education.  In other words, Andre accomplished his dream by taking a chance to go to school in the United States.  Had he remained in Brazil and never took that chance, who knows if he would have ever signed a professional contract in the sport.

As Andre’s first season in MLS unfolded with the Colorado Rapids, it was filled with many ups and downs.  Beginning the season completely winless, changing head coaches on three different occasions in one season, and sitting on the bench to start the season were all challenges that are rather common in sport, but not all at once.  However, when Andre finally got his chance, he took it and scored important goals for the club.  His work ethic defensively and his continued knack for being in the right place at the right time continued to be his shining attribute and would lead to starting lineups week after week.  With seven goals and five assists in his first year as a professional, Andre was named AT&T Rookie of the Year in Major League Soccer.  Once again, this is the first time that anyone from Montverde Academy had received such an award in the sport of soccer at the professional level.

As it came down to the last regular season match, the Colorado Rapids were still in contention to make the playoffs if they were able to beat LAFC in LA and other results fell their way.  They had fought their way into the playoff picture and were hopeful that their season would continue after their match in Los Angeles.  Unfortunately, LAFC won the match 3-1 and Colorado was out.  Their season was finished for 2019 and their playoff hopes were over.

As I just so happened to be watching the Colorado vs. LAFC match, I soon received a text message on my phone literally one hour after the game and it was from Andre.  It read, “Hey coach, was wondering if you guys would have me to campus this week.  We lost today so our season is over and we get a week off.  I wanted to come down to MVA.  Would love to talk to the guys, train, and see you and the rest of the staff.”

To all of us, this was a very special moment.  The first thought when his match was over just so happened to be Montverde Academy and the SIMA Program.  He wanted to give back to the game and visit the very place his journey began in the United States in 2013.  Two days later, I was able to watch Andre train with our aspiring SIMA youngsters and speak to the entire SIMA Program about his experiences.  It was great to see that he never forgot where he came from.  He understood what Montverde Academy had done for him not just as an athlete, but as a person first, student second, and athlete third – always in that order.

We of course will always remember Andre’s success here at Montverde Academy winning two national championships, moving on to the University of Denver to pursue an education in Marketing and Business, his First Round Draft Pick selection in Major League Soccer and now his MLS Rookie of the Year award.  These are all huge accolades and he is extremely deserving of it all.

However, what is most important is that we are thrilled of the man he has become.  We are happy that he is able to live his dream of being a professional soccer player because he went to school, not necessarily because of what team he played for as a youngster.  I have no doubt that there will be several more goals to be scored and wins to be had as we always saw this from the beginning.

What matters most is that Andre is now prepared for life.  He is a professional athlete with a degree.  He has a bright future in the sport of soccer and also has a plan for when his career comes to an end through education.  To me, this is the best of all scenarios and the fact that he took the time to come back and visit his aspiring brothers at Montverde Academy is the ultimate championship trophy in the GAME OF LIFE. 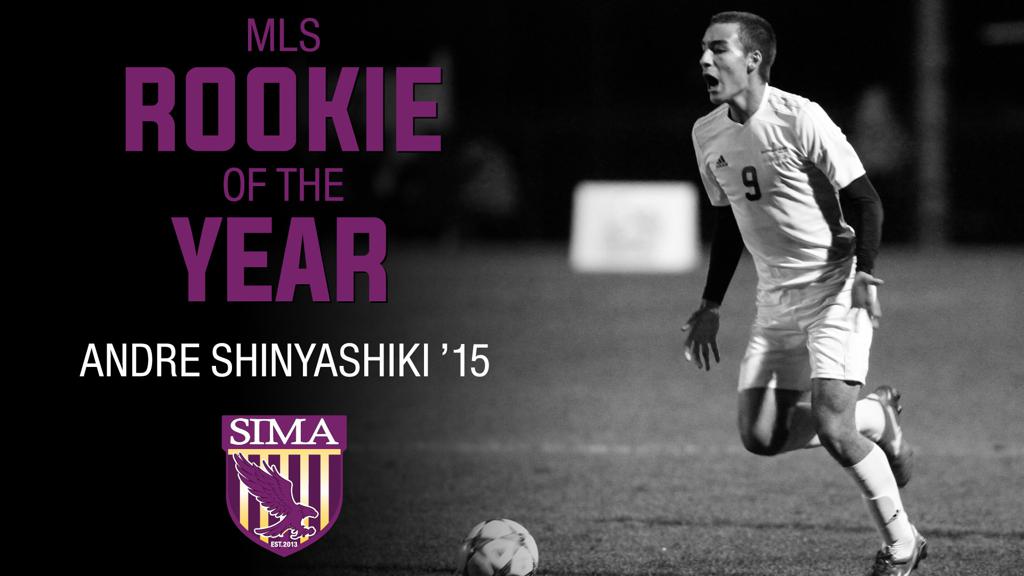