Montverde Academy proudly hosted a grand opening and ribbon-cutting ceremony on November 10 of the new Orlando Health | South Lake Hospital Field, which is part of the 15-acre athletic complex. The new field was immediately put into use with a full day of games scheduled.

The Soccer Institute at Montverde Academy (SIMA) is a year-round highly competitive soccer program for more than 200 student-athletes in grades 7-12. In addition, Orlando City Soccer Club partnered with SIMA earlier this year to manage and operate its U.S. Soccer Development Academy program which has about 185 players. With these two programs training, practicing and competing, the soccer fields are in constant use daily. Through generous support from official medical partner, Orlando Health | South Lake Hospital, all players will benefit from the new synthetic turf field.

The new eco-friendly field was developed and installed by Soccer Grass; an industry leader for more than 25 years in the development of sports fields. The field is the first in the United States to use the Terra Turf System which combines Multi-fibrillated yarn, proven to be the most durable on the market, with 100% organic infill for a better playing experience. The Terra Turf System ensures high performance with optimal player surface interaction and a lower temperature similar to natural grass.

“South Lake Hospital has been a tremendous asset to South Lake County and Montverde Academy for many years,” said Dr. Kasey Kesselring, Headmaster, Montverde Academy. “We are grateful for the continued support that Orlando Health | South Lake Hospital has provided. Their medical professionals frequently partner with our coaching and training staff to assess, plan and treat our student-athletes. We are excited about our partnership with Orlando City Soccer Club, which has expanded the number of players using our fields. Orlando Health’s donation has allowed us to enhance a field that will impact many players for years to come.”

“On behalf of Orlando Health | South Lake Hospital, we would like to recognize and thank Dr. Kesselring for his progressive vision to make this venue, and the entire soccer program, a reality and for his continued collaboration with our organization to allow us to be a partner in health, wellness and sports at Montverde Academy,” said Andy Gardiner, Senior Vice President of External Affairs, Orlando Health.

Earlier this year, MVA and Orlando City Soccer Club launched a partnership for SIMA to manage and operate its U.S. Soccer Development Academy program for the U-15, U-17 and U-19 boys’ programs.Orlando City Development Academy players are coached by professional youth coaches, with access to the Academy’s on-site residency and educational programs for student-athletes. In addition, Mike Potempa has become the General Manager for the Orlando City B, the reserve team, and MVA has become its official home for training and matches in a continued effort to advance and develop talent throughout central Florida. Montverde Academy and SIMA are proud to host Orlando City B for the 2019 season in the new third division.

“We are very proud to have this partnership with Montverde Academy,” said Alexandre Barreira Leitão, Chief Executive Officer, Orlando City Soccer Club. “The reason we pursued this partnership with the Academy is because we want to work with the best people at the best facilities to order to develop players from nine years old up to the first team. Today I can tell you that our future a is bright – looking to the players, fantastic facilities and amazing technology that are best in class, I’m sure the future is going to be great for all of us.”

To help celebrate the milestone MVA and SIMA alumnus, Diego Campos (’14), a professional MLS player with the Chicago Fire and Matheus Silva (’15), who plays in the United Soccer League for Swope Park Rangers, returned to campus for the event. They met and spoke with students on Friday. Both young men shared their stories with student-athletes, encouraging them to take full advantage of the resources at MVA, to work hard at both their studies and athletic training and to recognize the opportunity they have as part of the SIMA programs.

“I’m excited to be back on campus and surprised by how much has changed in just four years,” said Campos. “Montverde Academy and the SIMA program helped me get a great education and play soccer at Clemson University, which then lead me to achieve my dream of playing soccer professionally. I am happy to be here to speak with students and celebrate the continued growth and success of the Academy.”

At the close of the event on Saturday, soccer players from Central Florida Dreamplex, a program that provides children and adults with physical and/or developmental disabilities access to fitness, recreational, and social opportunities, met Diego and Matheus and played soccer on the new field. Following the grand opening, a series of games commenced for an afternoon of exciting soccer games! 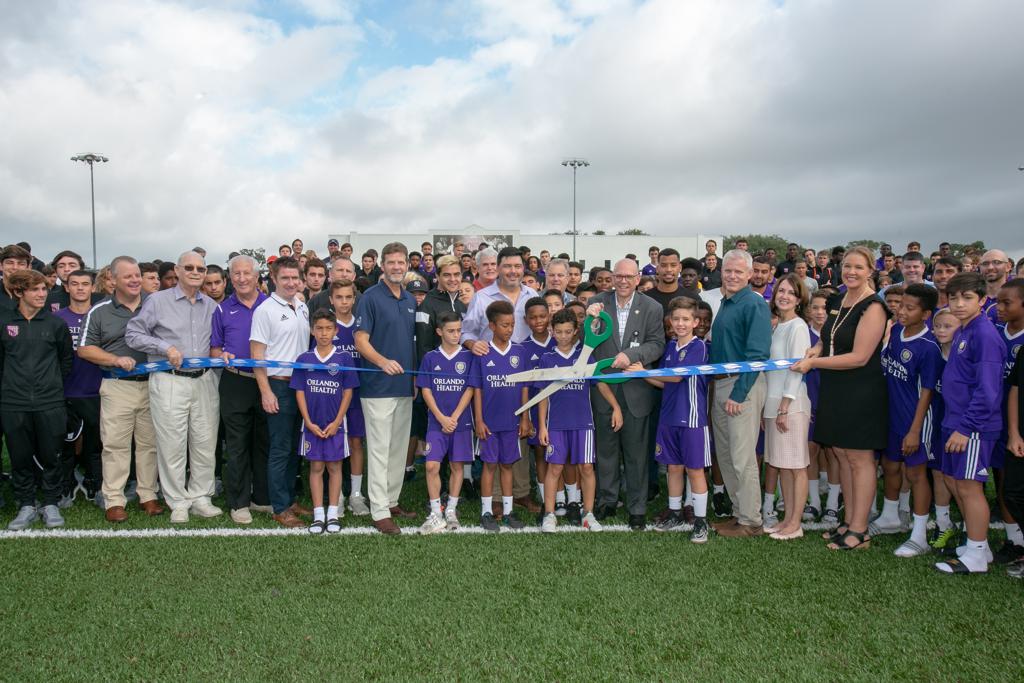 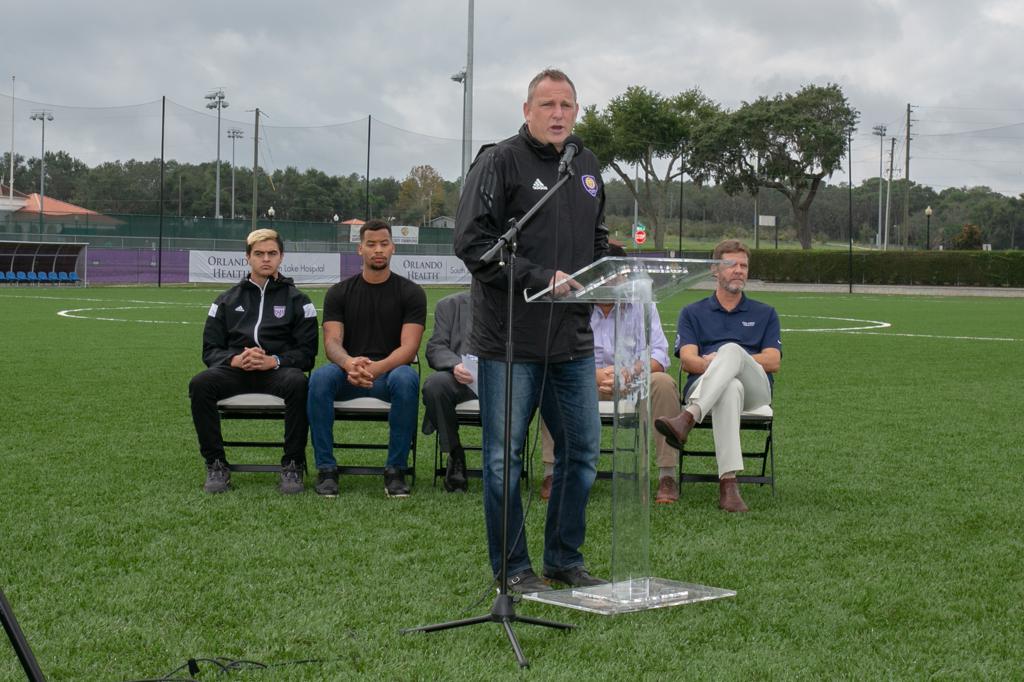 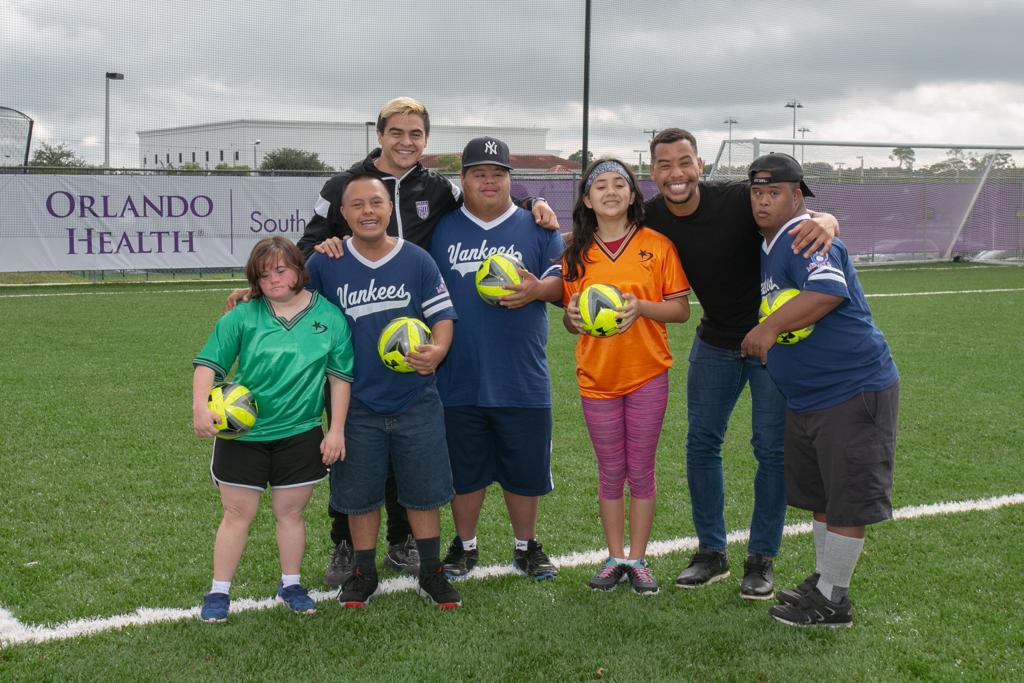 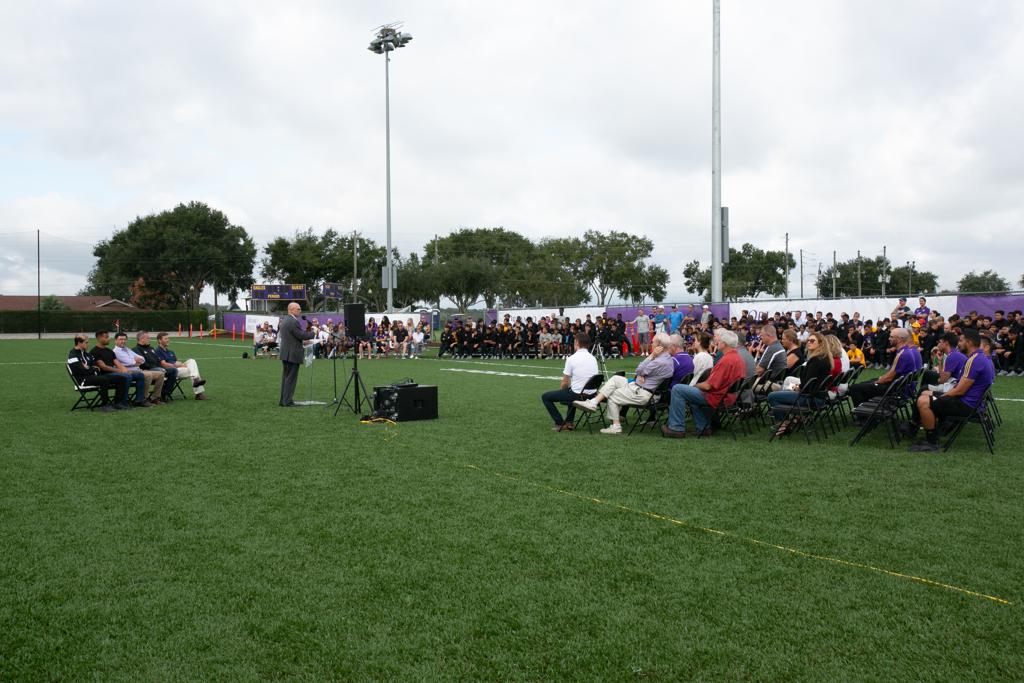